Lanzarote is the Canary Islands’ easternmost island and was created by volcanic eruptions many years ago. Its people have willingly accepted its amazing landscape beauty in creative and unique ways. Many myths have abounded about the Canary Islands over the generations. Its original inhabitants believed the home of the gods is the volcanic mountains while early scholars believed the area to be the Lost City of Atlantis uppermost mountains. With its striking beaches, organic architecture, and spectacular landscapes, Lanzarote is perhaps the Canary Islands’ most magical.

Cesar Manrique Foundation is the best place to begin your time here. It was once the studio and home of the most famous son of the island. This volcanic eruption site has many rooms built into caves that were created by volcanic bubbles. Visionary, architect, and artist, Manrique’s work was the ideal marriage of Mother Nature and human creativity. Throughout Lanzarote, you will find Manrique’s touch, from the Mirador del Rio’s fascinating lookout to the Jardin de Cactus.

To truly understand Manrique’s vision depth for this island, descend Jameos del Agua stone steps. It is an astonishing network of caves that have been transformed into one of the most beautiful restaurants and concert venues you will ever visit. 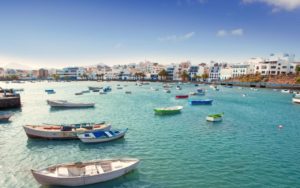 Hire a guide and go even deeper at the green caves, Cueva de Los Verdes. Incredibly dramatic scenery was left behind by the massive forces these islands were forged from. Tour the Timanfaya National Park to see how heat from the earth’s center gets to the surface. Witness the power of the earth at Los Hervideros Caves. The caves were formed when lava met the ocean and the ocean still seems to boil on a windy day.

Cool down on one of the beaches of the island. Pull up a chair at Playa Blanca or stroll to Papagayo Beach. Go snorkeling off the pebbled cove or relax in the rock pools at Punta Mujeres. Or head down to Yaiza and stroll the 17th-century town center streets. Manrique believed no building on the island should be higher than a palm tree and his passion for the local environment meant most Lanzarote villages have maintained their authentic flavor.

Take a trip to Puerto del Carmen as night falls. This is the main tourist town on this island and you can enjoy the view across the harbor up to the Papagayo Mountains. Guided by the Cesar Manrique’s visionary hand, Lanzarote has learned to embrace Mother Nature’s unique gifts. This island understands beauty’s true nature and you will too as you watch the sun setting over this spectacular island.